Every car sound system has an amplifier of some sort, but most of them are built into the headunits, and they’re typically nothing to write home about in comparison to their external counterparts. If you’ve ever cranked up the volume on your receiver and noticed that your speakers are distorting, one of the main culprits is the underpowered, built-in amp. Your speakers’ power handling characteristics are definitely part of the picture, but a powerful amp can do wonders even in a stock situation.

Many people who are looking to upgrade their car audio system have no idea where to start and often go with the most visible option first — a new aftermarket receiver. While a new receiver can relatively enhance overall sound quality, it’s the speakers and amplifiers that are the key to making a night and day difference.

Choosing the best car amplifier isn’t an easy task. There’s a wide variety of types, features and prices, which makes choosing the right amplifier a challenge. That’s why you need to figure out what your needs are.

To help you make the right call, we’ve put together this resource – a one-stop-shop, all-inclusive buying guide so you can make an informed buying decision.

When it comes to car amplifiers, Rockford Fosgate is probably one of the most legendary. They’re one of the most reputable brands in the car audio industry. They’ve been around for a very long time, and have mastered the art of providing quality audio component for reasonable prices.

Rockford Fosgate offers a wide range of reasonably priced car amps. Their car amplifiers come in three general categories labeled “Prime”, “Punch”, and “Power”. Amps in the “Prime” category are the entry-level amps while those in the “Power” series are company’s high-end amps. More of a middle-of-the-road line of amplifiers, the “Punch” series which offer a great value for the buck.

The R1200-1D is one of the best car amplifiers in the Rockford-Fosgate Prime series of amps. With this class D monoblock amp is designed to respond quickly to the peak demands that you may throw at your sound system. It’ll put out 400 watts RMS to a 4-ohm sub, but will crank out 1,200 watts RMS when it’s running a 1-ohm subwoofer setup.

Rockford Fosgate R1200-1D is an ultra-efficient mono amplifier thanks to its Class-D circuitry. It’s designed to deliver rich, full bass to any system. It’s featured with variable low-pass and subsonic filters, Rockford Fosgate’s famous Punch bass boost, as well as a wired remote Punch level control. It also has preamp-level inputs and outputs so you can hook it up to almost any stock or aftermarket car receiver.

All in all, the R1200-1D is a solid amplifier for the price. It has plenty of power, it runs cool, and most importantly, it has no distortion whatsoever.

With its outrageous output stage, this 2-channel amp is well-suited for driving a pair of power hungry speakers or subwoofers, filling your ride with plenty of loud, clean music. This versatile amp can also be switched into mono mode to drive a single sub with up to 1000 watts RMS.

This 2 channel amp is featured with high-pass filter to keep the low bass out of your speakers so that they perform more efficiently. It also has built-in low-pass filter to send the correct low frequencies to your sub(s). Furthermore, this amp has preamp inputs and outputs, as well as variable Punch EQ2 bass/treble boost, in case you want to add a little boom and sizzle back into the mix.

Rockford Fosgate Punch P1000X2 sports C.L.E.A.N. setup (Calibrated Level Eliminates Audible Noise), which is meant to help you match a source to amp, optimize output, and ensure that your music will sound as clean and powerful as possible. It works like this:

And you’re done. It’s that simple — your amplifier is now set to match your receiver’s output.

If the Blue stays Red while you’re playing your music, that means the amp is telling you that it’s not well-matched to the source, and you should turn it down to prevent damage.

P.S : there are smaller models of this amp if you’re looking for a less powerful amp.

Alpine is another well-recognized names in the car audio industry. They’re offering a wide range of car audio components including speakers, subwoofers, headunits and amplifiers.

Alpine MRV-F300 is one of the best car amplifiers that you can buy. This compact 4-channel amp is quite versatile. Alpine made this amp so small that you can mount it almost anywhere in your car.

This amp features an advanced thermal protection technology called “Enhanced Shutdown Performance” to prevent annoying shut-downs. This technology works by slightly rolling back the output when the amp is about to overheat from playing at its limit for too long. So, instead of completely shutting down, the amp continues powering your speakers or subs, until it cools down enough to return to full power.

The Alpine MRV-F300 is featured with high- and low-pass filters so that your speakers and subs can play efficiently and sound their best. It also features a bass boost so you can apply some extra low-end punch. This amp comes with preamp- and speaker-level inputs, so you can hoot it up to almost any receiver, even a factory-installed one.

If you’re looking for an amp that is so versatile that it can power an entire car audio system, then the Rockford Fosgate Prime R600X5 is a great option to consider. It’s one of the best 5-channel amplifier in its price range.

Speaking of long-lasting performance, this amp is incorporated with built-in sensors to keep track of the output current and power supply temperature, ensuring that short circuit and plunging impedances won’t damage your amp.

The R600X5 amp comes with variable high- and low-pass filters. It also comes with Rockford Fosgate’s famous selectable Punch EQ bass boost to get maximum performance from your speakers and sub. Additionally, this amp has speaker-level inputs so you can hook this amp up to almost any system, even a factory stereo.

Why Add a Car Audio Amplifier?

Some people think that amplifiers are just for seasoned audiophiles or bassheads who want the whole world to hear their bass. In reality, an amplifier is for anyone who cares about great sound quality and awesome music. A powerful amp will breathe life into your music, bringing out all of its excitement and detail. Here are some benefits to adding an amplifier to your car audio system.

External amps are categorized by the number of channels they have. There are mono channel amps, and multi-channel amps. Multi-channel amplifiers come in 2-channel, 3-channel, 4-channel, 5-channel, and 6-channel varieties. A channel is an electronic circuitry output used to provide power to a single speaker.

Car amps with multiple channels can be used to power multiple speakers at once, while mono amps can only power one speaker at a time. The right number of channels will depend on how many speakers you have in your audio system.

How to Choose the Best Amp for Your Car

External amplifiers are often categorized by class ratings (A, B, A/B, D, etc.). The class of an amplifier relates to the design and features of the amplifier’s electronic circuitry.

Power dissipation (in the form of heat) and audio signal distortion are two key factors in determining the efficiency of an amplifier. The table below describes the primary advantages and disadvantages of each car amplifier class.

Your amplifier gets its input signals from your receiver’s output typically via RCA cables. Most, if not all aftermarket headunits are equipped with at least a pair of RCA preamp outputs that allows you to connect the receiver to the amplifier directly.

Some stock headunits do not have these pre-amp outputs. In that case, you’ll have to purchase an amplifier with speaker-level inputs (aka “high-level inputs”). These will allow you to connect the amp to a receiver that lacks RCA preamp outputs.

Bass boost is a type of electronic circuitry built into some amplifiers. It’s meant to increase the output of low frequencies in dB increments. Most car amps allow you to adjust bass boost on the go. If you decide to boost the bass, you’ll need to re-adjust the amp’s gain, to compensate for the boost and prevent the amp from clipping and distorting.

RMS is one of the most important things you need to take into account when looking for a car amplifier. It refers to the amount of continuous power (measured in watts) that an amplifier can produce. The higher the RMS figure, the louder and cleaner your music sounds.

Peak wattage on the other hand refers to the maximum wattage an amplifier can deliver as a brief burst during a musical peak. It often double the RMS value. And it’s often used as a marketing gimmick to entice people to buy. When choosing an amplifier, the RMS rating is the only power rating you should pay close attention to.

Most car amps have crossovers built into their circuitry. Crossovers consist of both high-pass and low-pass filters. These filters are electrical circuits used in amps to prevent sound distortion.

Crossovers consist of both high-pass and low-pass filters. The low pass filter allows only frequencies below the crossover point to be amplified, while the high-pass filter allows only frequencies above the crossover point to be amplified — useful for keeping highs away from the subwoofer and lows away from your speakers, so that each component can play more efficiently.

How to Install a Car Amplifier 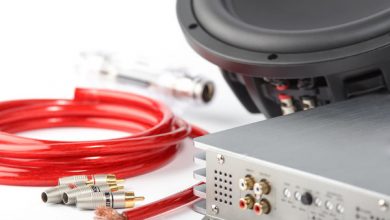 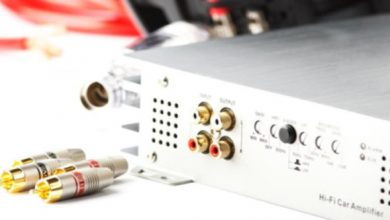 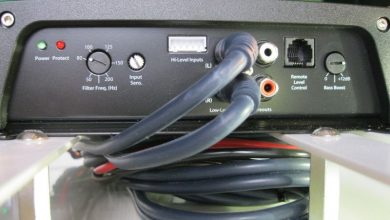