Alpine is one of the top-rated car stereo brands. They’ve been around for quite a long time, and they’ve built a solid reputation for manufacturing quality car audio components.

In today’s post, we’ll be looking at some of the best Alpine head units, which are generally a pretty safe bet as they’re well-designed and are loaded with some great features.

Alpine budget models are not the most competitive car stereos, but their high-end and especially their mid-range car stereos are amongst the best, albeit usually at a price premium.

The ILX-107 is one of the best Alpine head units that you can buy, all things considered. This flagship headunit is a multimedia marvel. It’s one of the fewest touchscreen car stereos to feature a built-in Wi-Fi connection for a smooth, seamless driving experience, as this unit gives you the luxury of simply getting in and going. The receiver and your iPhone® link right up, so that you’re ready to roll with all the hands-free wonderfulness that CarPlay brings to driving without having to go through complicated menu.

This Alpine headunit was designed specifically to work wirelessly with Apple CarPlay. It has Siri voice control for driving scenarios – Siri lets you make calls, compose texts, select tunes, and start navigation …etc without taking your hands off the wheel.

Alpine iLX-107 is a digital media receiver, which means that it doesn’t have a CD player, but with its built-in Wi-Fi connection, Apple CarPlay, an AM/FM radio, and rear AUX and USB inputs, you’ll never miss it.

The iLX-107 has a rear-mounted USB port that can be accessed via an extension cable, as well as a rear-mounted aux-in jack. It also has a rear camera input. It comes with four 6-channel preamp outputs for use with a separate amplifier rated at 18 watts RMS. There’s high-pass/low-pass filters, digital time correction, a Preset EQ, and Alpine’s very owner Bass Engine SQ.

To further tweak sound, you get a 9-band parametric equalizer, as well as tone controls. Additionally, you can adjust sound settings using the Alpine TuneIt™ app.

Dollar for dollar, Alpine iLX-107 is one of the best Apple CarPlay stereos that you can buy. However, at its price tag, the headunit should have been featured with satellite radio, HD radio and a volume knob.

If you’re looking for an Alpine do-it-all car stereo, then the CDE-HD149BT is for you. It’s one of the best single DIN headunits that Alpine has to offer. It packs a serious sonic punch and it’s loaded with a ton of bells and whistles including HD Radio® tuner, built-in Bluetooth® for hands-free calling and audio streaming, Pandora® Internet radio control, and various other sonic goodies.

Additionally, Alpine’s user-friendly controls round out the package, with an innovative new smartphone app called “Alpine TuneIt App” which is designed to let you finetune your system.

Alpine CDE-HD149BT is featured with a three-line full rich LCD display with selectable quad-illumination, so you can match the illuminated buttons on the radio to your dashboard.

This unit has a CD/DVD drive, an AM/FM tuner, and is SiriusXM satellite radio ready with the addition of SiriusXM connect vehicle tuner.

The CDE-HD149BT has a rear-mounted USB port that can be accessed via a supplied cable, as well as a rear-mounted auxiliary input. It also comes with 6-channel preamp outputs for use with a separate amplifier. There’s high-pass/low-pass filters, subwoofer control, and loudness/low-frequency boost.

To further tweak sound, you get a 9-band parametric equalizer with 11 preset tone curves, Alpine’s exclusive Media Xpander which is engineered to bring out the musical details lost in compressed media, time correction which is meant to delay the audio signal to the speakers closest to the driver for optimum staging, and more.

The biggest thing with the Alpine iLX-W650 is its shallow chassis. At only 2-13/16″ deep, this headunit makes a great candidate for a smooth installation in many depth-challenged vehicles.

It comes with a 7″ capacitive touchscreen enhanced with swipe control over volume, track-skipping, and more, so you can keep your eyes on the road.

This headunit is loaded with a variety of sound sculpting goodies including 9-band parametric equalizer with a variety of EQ presets, Media Xpander, and time correction to maximize the audio signal sent to the powerful built-in amplifier. It has three sets of 4-volt preamp outputs for adding additional amps for more power.

The CDE-W265BT is one of Alpine’s top rated double DIN headunits. It’s designed to fill your vehicle’s double-DIN (4″ tall”) opening and it’s featured with an easy-to-read multi-line display and easy-to-reach controls.

As with most new aftermarket car stereos, this Alpine double DIN headunit features Bluetooth connectivity for hands-free calling and audio streaming. It has a CD player, an AM/FM tuner, and is SiriusXM satellite radio ready with the addition of an extra-cost tuner.

This unit features controls for Apple Music, and Pandora. It also features Alpine App Direct mode which allows for basic control of iPhone® apps through the receiver.

The CDE-W265BT has a front-mounted USB port and auxiliary input. It’s incorporated with a built-in MOSFET amplifier rated at 18 watts RMS, as well as 6-channel preamp outputs for expanding your car audio system.

Furthermore, you download Alpine TuneIt App on your smartphone (iPhone or Android), and use your receiver’s extensive sound adjustment capabilities to improve the acoustics in your car.

If you’re looking to scale down from the Alpine CDE-HD149BT (mentioned above) and you don’t need anything massive, Alpine has plenty a few other choices available. One of the more popular options available is the Alpine CDE-172BT.

As with most aftermarket receivers, and in addition to AM/FM tuner and CD player, the CDE-172BT features built-in Bluetooth connectivity for hands-free calls and wireless music streaming. Its dual phone connection allows you to make and receive calls from either of two paired phones.

This headunit has an easy to read 1-line LCD display with variable color illumination. It has a front-mounted USB and Auxiliary inputs. It’s also compatible with SiriusXM satellite radio tuner so you can enjoy a myriad of music, news, and sports programs coast to coast.

As far as sound shaping goodies are concerned, this alpine single DIN receiver is fitted with 3-band parametric equalizer and 11 different EQ presets. There’s also high- and low-pass filters with subwoofer level control, and a premium 24-bit digital-to-analog converter which allows for excellent sound quality and playback of your music.

If you’ve ditched CDs in favor of digital formats, then the Alpine UTE-73BT is for you. It’s one of the best digital media receivers out there.

The Alpine UTE-73BT features a single-line, high-contrast LCD display with variable color illumination. It features Bluetooth connection for hands-free calling and audio streaming. It’s also compatible with both iPhone® and Android™ to give you control over your stored music files with a wired USB connection. The built-in Pandora® control on the other hand allows for track-skipping, channel browsing, thumbs up/thumbs down control and more from the receiver as well.

As far as expandability options are concerned, this receiver has front-mounted USB and Auxiliary ports. Additionally, If you’re planning on taking your car audio system to the next level by adding an amp or two, the UTE-73BT features three sets of 2-volt preamp outputs. Your music will also benefit from the premium 24-bit digital-to-analog converter. 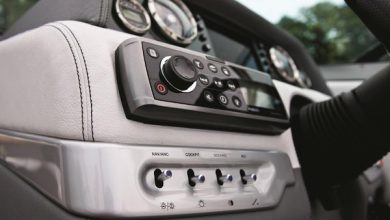 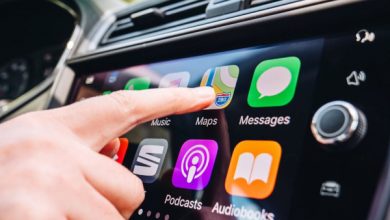 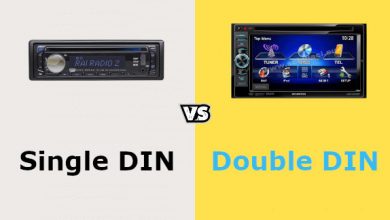